Waste water has two main origins, households and industries. In most countries nowadays, these discharge waters are processed before they are returned to grounds, rivers and oceans. Depending on the degree of treatment received by waste waters, they can even be used for irrigation. Waste water treatment is the responsibility of local governments and it is regulated by specific legislation. 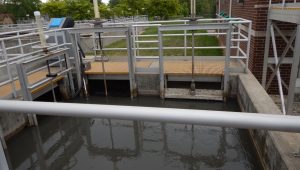 Science and technology has added the knowledge required to improve the treatment of waste water. There are three steps involved in the process of cleaning it. The first one is called Primary or Mechanical treatment and it involves the removal of solids. This step is followed by Secondary or Biological treatment. The aim of this level is to remove the organic material present in the water and this is mainly done with the use of bacteria.

In many cases water is considered clean enough to be returned to nature. However, there are several contaminants that may still be present and they can be removed by one of several Tertiary treatments. In one of this treatment the aim is to remove phosphorus from the water. Phosphorus comes mainly from detergents and from human urine and feces.

Phosphorous may be removed by one of two processes. It may be precipitated in a chemical reaction that leads to the formation of sludge. It can also be removed by bacteria that take up the phosphorous and when removed from the water, the resultant biosolids may be used as fertilizers.

Nitrogen can also be removed from the water through a complex nitrification procedure that is followed by a denitrification reaction. Both of these steps are biological and require specific chemicals and equipments. Another aspect of tertiary treatment may be the filtration of micro solids and this process calls for the use of sophisticated filters. And finally there is the possibility of disinfection which may be achieved with the use of chlorine, ozone or ultraviolet light.

Tertiary treatments of waste water are expensive due to their complicated nature but they certainly add a high degree of purification to water that has been used and has to be returned to the environment.

Olmo Cuarón Has an Interest in Animation

Olmo Cuarón is part of a family that is well known in Mexico, as well as in the rest of